The YWCA of Palestine Joins a Webinar Organized by YWCA Japan 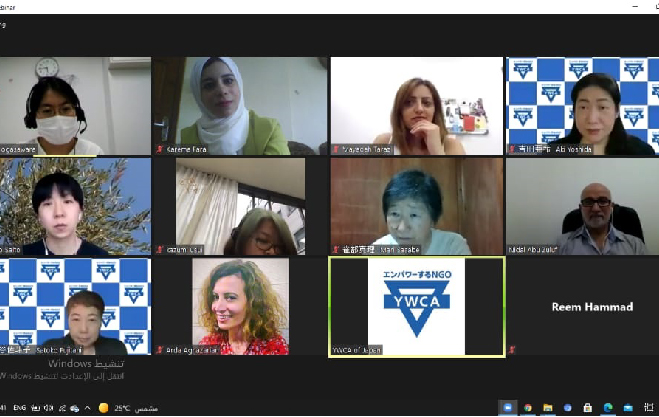 The YWCA of Palestine joined a webinar organized by the YWCA of Japan on Saturday 26 June 2021 titled "The Palestinian Struggle Can No Longer Be Silenced". The President of YWCA Japan Satoko Fujitani welcomed the audience and expressed solidarity with Palestine. The newly appointed General Secretary of YWCA Palestine Amal Tarazi welcomed the attendees and thanked YWCA Japan for hosting the webinar. She highlighted the importance of raising global awareness of the situation in Palestine. The Manager of the Joint Advocacy Initiative (JAI) Nidal Abuzuluf presented the political situation in Palestine since the 1948 Nakba (the catastrophe) until today. Two young women, Karima Al Farra from Gaza and Reem Hammad from the Sheikh Jarrah neighborhood in Jerusalem, shared their personal stories and spoke about the practices of the Israeli forces and the human rights violations. A film was screened highlighting the story of Karima who, along with her family, survived the dreadful shelling of their home during the latest attack on Gaza.