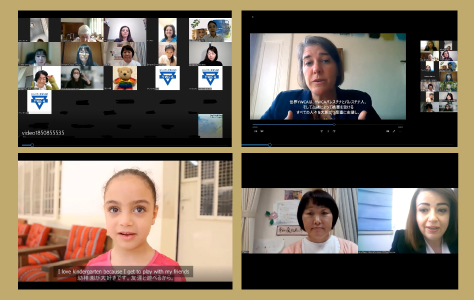 The YWCA of Palestine, in partnership with YWCA Japan, organized a webinar in commemoration of the 74th anniversary of the Nakba and to shed light on the work of YWCA Palestine in refugee camps, especially the two kindergartens in Al-Jalazone camp in Ramallah and Al-Bireh governorate and Aqabat Jaber camp in Jericho and the Jordan Valley.
Haifa Baramki, president of the board of directors of YWCA Palestine, said that the association has sought, since its establishment, to create safe spaces for children to learn and innovate through childhood and learning centers at its local member associations. She noted that the kindergartens in Al-Jalazone and Aqabat Jaber camps as well as  Jerusalem continue to provide their services to the local community despite the challenges and difficult economic conditions.
Baramki thanked YWCA Japan for its efforts in shedding light on the suffering of the Palestinian people as a result of the Israeli occupation and its practices in violation of international law, international humanitarian law, and all relevant UN resolutions.
In turn, the General Secretary of YWCA Palestine Amal Tarazi said that the association, through its various programs related to promoting the economic empowerment of women and young women, vocational training, leadership, civic participation of young women and youth, women's rights, and just peace, pays special attention to Palestinians refugees in refugee camps in line with its belief in their right to return and live in dignity.
She pointed out that the association has launched a campaign to mobilize funding for the kindergartens in Aqabat Jaber and Al-Jalazone refugee camps in light of the difficult conditions that have been exacerbated in the past three years by the COVID19 pandemic. She stressed that the YWCA will continue to work to ensure the sustainability and development of the two kindergartens to improve the services provided to refugees in the two camps, especially children.
In the same context, member of the General Assembly of YWCA Palestine and former President of the board of directors Samia Khoury highlighted the reality of the Palestinians since the Nakba, noting that the Nakba was a pivotal event in the history of the Palestinian people and its repercussions continue after 74 years.
For her part, the President of YWCA Japan Satoko Fujitani delivered a presentation on the activities and programs of the association, stressing the depth of its relationship with YWCA Palestine.
Representatives of the association's member association in Japan delivered speeches during the webinar, affirming their solidarity with the Palestinian people until they achieve their full rights.
In her speech, World YWCA General Secretary Casey Harden emphasized the association’s mission to advocate for member associations and shedding light on peace and security issues for the people of the world at large. She thanked the YWCA of Palestine and the YWCA of Japan for organizing this important webinar in commemoration of the Nakba.
Vera Bano, board member of the YWCA in Jericho, Ibtisam Dahou, president of the YWCA in Ramallah, and Director of the community center in Al Jalazone refugee camp Diala Nasrallah spoke about the current reality of the two kindergartens and the interactive teaching methodology followed aimed at enhancing the communications skills of the children, supporting their physical and mental needs, and promoting innovation and creativity.
The YWCA of Palestine focuses on advocacy to mobilize international solidarity with Palestine, as it is a unique opportunity to shed light on the challenges facing the Palestinian people, especially women and youth, in addition to sharing experiences and best practices.
Share :