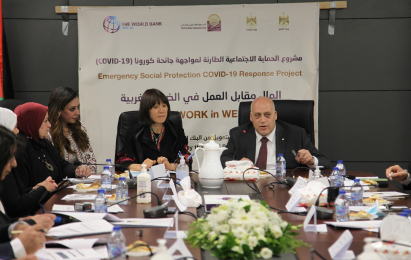 The YWCA of Palestine has launched the “Cash for Work” employment project, today Saturday, April 16, in partnership with 54 organizations with the aim of providing short-term job opportunities for vulnerable people in the West Bank affected by COVID19.
The association had signed a grant agreement to implement the project under the “Cash for Work in the West Bank” component, as part of the Emergency Social Protection COVID-19 Response Project, implemented by the Palestinian Fund for Employment, in cooperation with the Ministry of Finance, and funded by the World Bank.
The agreement was signed by the General Secretary of the YWCA of Palestine Amal Tarazi during a conference held at the Ministry of Labor, which was attended by the Minister of Labor, Chairman of the Board of Directors of the Palestinian Employment Fund Nasri Abu Jaish, the World Bank’s Regional Director for Human Development in the Middle East and North Africa Keiko Miwa, and the implementing partner organizations.
The project will provide short-term job opportunities for 6 months for vulnerable people affected by the pandemic, within the framework as part of the fight against poverty and unemployment.
Tarazi confirmed that this grant will add to the achievements of the association in the areas of job creation and paid internships, which contributes to the economic empowerment of young women and men, helps them enter the labor market, and increases their chances of obtaining permanent jobs.
She also pointed out that the YWCA signed memorandums of understanding with 54 partner organizations to support them through job opportunities, noting that the association will hold introductory meetings around the project and its implementation mechanisms with the partners before opening the call for applications from job seekers through the Palestinian Employment Portal.
Share :