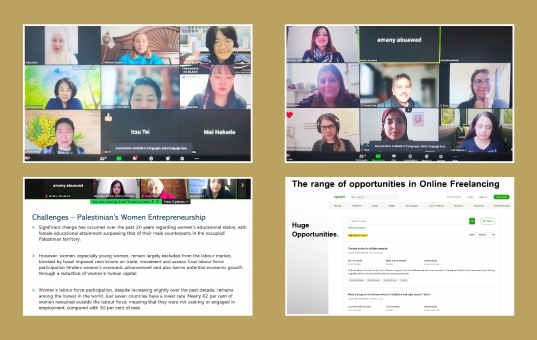 The YWCA of Palestine concluded its participation in the 66th session of the Commission on the Status of Women (CSW66) under the theme " Achieving Gender Equality and the Empowerment of all Women and Girls in the Context of Climate Change, Environmental and Disaster Risk Reduction Policies and Programs".
The association organized a virtual parallel session around "Economic Empowerment and Entrepreneurship", which shed light on the challenges that face Palestinian young women entrepreneurs, the possible solutions to such challenges, and the efforts of YWCA Palestine towards economic empowerment of women and young women.
Former President of YWCA Palestine and YWCA Ramallah, Rima Tarazi, who is a writer and an artist, touched on the political and economic reality in Palestinian under occupation, referring to her own personal experiences.
President of YWCA Palestine, Haifa Baramki, stressed the importance of this parallel session, noting that the association participated in the previous sessions of CSW with the aim of raising awareness of the reality of Palestinian women, and conveying their voices to the whole world.
The General Secretary Amal Tarazi, for her part, highlighted the work of YWCA Palestine  towards economic empowerment of women and young women, and creating job opportunities for them as well as the vision of the association towards supporting entrepreneurship, especially community innovation projects.
Tarazi said that "economic empowerment of women and young women is a major focus of the holistic approach followed by the YWCA of Palestine in empowering women to be able to participate in decision-making", referring to the potential Palestinian young women have, and their sense of creativity, and praising the creative initiatives and distinctive ideas that they have presented through the economic empowerment projects led by the YWCA.
Founder and CEO of Glow Innovations, Hassan Omar, tackled the challenges that face young women and men in Palestine, most importantly the lack of job opportunities and unemployment. He noted that entrepreneurial projects and community entrepreneurship open up new horizons for Palestinian youth to overcome challenges and improve their economic reality.
The Executive Director of YWCA Jerusalem, Sandrine Amer, spoke about the economic empowerment projects and programs implemented by the association.
Two young women from Gaza and the West Bank spoke about their experiences in entrepreneurship and income-generating projects, and shed light on the challenges they faced.
The session, moderated by the Director of Operations and International Relations, Mayadah Tarazi, included a short film on the experience of YWCA of Palestine in supporting innovation projects and entrepreneurship as well as an open discussion with local and international participants.
Share :