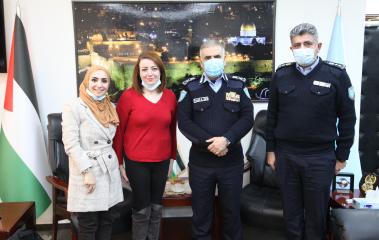 The General Secretary of YWCA Palestine Amal Tarazi met with the General Director of the Palestinian Police Maj. Gen. Yussef Al-Helou to discuss ways of cooperation in addressing women's issues, and raising awareness of cybercrime, gender-based violence, and protection mechanisms for female survivors of violence, by strengthening the relationship between the YWCA and the Cybercrime and Family and Child Protection Units.

Tarazi provided an overview of programs and projects of YWCA Palestine, highlighting "Shamal" project, which aims to promote the protection and reintegration of women and female survivors of violence in marginalized areas in Palestine, and "Safe Online" campaign being implemented within the project to raise awareness of cybercrime, especially the blackmailing and harassment women and girls are exposed to through social media.

Al-Helou welcomed the proposal for cooperation, stressing that the Palestinian police are there to serve all members of society. He also emphasized the importance of the programs and projects implemented by the YWCA, which intersect with the goals and work of the police.

Both parties agreed to sign a memorandum of understanding to institutionalize the relationship and for future cooperation in serving the Palestinian people.