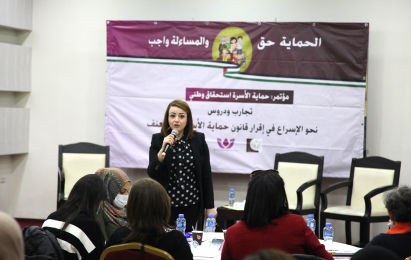 The YWCA of Palestine participated in the “Family Protection Is a National Entitlement: Experiences, and Lessons Learned” conference, organized by the Palestinian NGOs Forum to Combat Violence against Women (Al Muntada) in Ramallah, and Amal Coalition to Combat Violence against Women in the Gaza on Tuesday 1 March.
The Minister of Women’s Affairs Amal Hamad spoke in the first session, along with activist Zainab Al-Ghunaimi from Gaza, who represented Al Muntada and the Coalition, representative of the Palestinian Human Rights Organizations Council (PHROC) Helmi Alaraj, representative of General Union of Palestinian Women Fawzia Al-Huwaihi, and representative of “Alliance for Solidarity” organization Srida Hussain.
The second session titled “ Regional Experiences in the Implementation of the Family Protection Law” highlighted the experiences of different Arab countries, namely Jordan, Lebanon, Tunisia, and Morocco in addition to Palestine. The Coordinator of Al Muntada Sabah Salameh delivered a speech at the end of the session shedding light on the efforts made towards the adoption of the Family Protection Bill.
The two sessions were followed by a discussion session,  moderated by the General Secretary of YWCA Palestine Amal Tarazi,  with the conference participants in Ramallah and Gaza, through Zoom. The participants demanded the establishment of a strong public movement to lobby the government to adopt the Family Protection Bill, and several other laws that combat discriminatory practices against women. They also agreed to form a committee responsible for contacting General Secretaries of the Factions, and ministries to discuss the adoption of the Bill.
Tarazi stressed the importance of uniting lobbying efforts and working as a team towards the adoption of long-awaited Bill, in light of the increasing geneder-based violence in the Palestinian Society.
The President of YWCA Palestine Haifa Baramki also emphasized the need for engaging all members of society in the efforts made towards the adoption of the Bill, and not just women, young women, and women’s organizations, as the Bill targets the family as a whole.
The Family Protection Bill, consisting of 52 articles, dates back to 2003. The first draft was submitted to President Mahmoud Abbas in 2018 before it was returned again to the Council of Ministers, and has remained on the table since 2019.
Share :