YWCA Palestine Completes Training around the Protection Mechanisms of Women 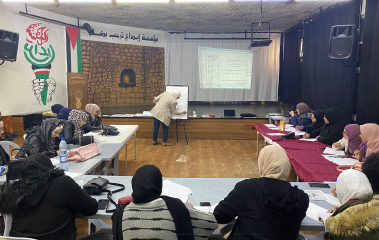 The YWCA of Palestine completed 30-hour training, on Sunday 13 February, around the protection mechanisms of women and young women and the ways to provide psychological as well as social support and counseling to them. The training was led by the Psycho- Social Counseling Center for Women.
The training was organized within “Shamal” project implemented by the YWCA of Palestine through funding from UN Women, and in partnership with three community-based organizations, including Ibdaa Cultural Center in Dheisheh refugee camp – Bethlehem, the Phoenix Center in Al Arroub Refugee Camp - Hebron, and the YWCA Community Center in Jalazone refugee camp - Ramallah and Al-Bireh Governorate.
The training, hosted by Ibdaa Cultural Center,  aimed to strengthen the capacity of 18 female social workers to provide counseling, as well as psychological and social support to women and young women who are survivors of gender-based violence in refugee camps, through partner organizations within “Shamal”.
“Shamal” aims to promote the protection and reintegration of women and girls subjected to violence as well as survivors in marginalized areas in Palestine by targeting refugee camps, in addition to raising awareness of the protection mechanisms and the referral system.  The project also includes an awareness campaign on cybercrime, especially blackmailing and harassment women and girls are exposed to through social media, under the slogan “Safe Online”.
The campaign aims to raise the awareness of female survivors of violence in specific and Palestinian women in general of the protection mechanisms, the referral system, and their rights. This is in addition to lobbying decision-makers to enact laws that ensure protection for women and promote their civic engagement and participation in decision-making. The focus of the campaign is cybercrime and the blackmailing of women online, including sexual or physical blackmailing, threats, verbal violence or harassment.
The awareness campaign includes organizing media activities and events, conducting interviews, workshops, and meetings with decision-makers, mobilizing partners, such as community centers, human rights organizations, women’s organizations, psychological and legal counseling centers, and the Palestinian police, especially Family and Juvenile Protection Unit, journalists, and influencers.
Share :