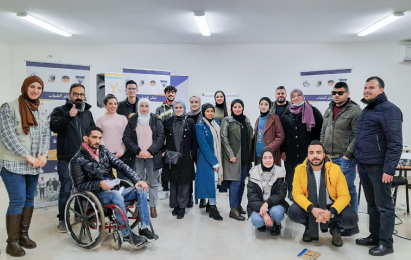 The YWCA of Palestine organized the first annual meeting within the "Youth Forums" project on Saturday February 5 at its office in Ramallah. The meeting was attended by representatives of the project youth groups and partners from Bethlehem, Ramallah, Jenin, and Tulkarm.
The meeting highlighted  the 2021 achievements of the project, and discussed the 2022 action plan, which includes regular meetings with youth groups in each project  area, the development of a national plan for a youth-led advocacy  campaign, the opening of “safe spaces” for youth that were created last year, and conducting awareness and cultural activities for youth. The  project will also provide opportunities for national and international participation in several forums and conferences concerned with the rights of youth, women and people with disabilities, and that discuss issues of gender, community justice, combating violence against women, cultural exchange and others.
At the end of the meeting, the project partners and youth groups agreed on the topics suggested for the national campaign, the mechanism for developing its plan and activities and implementing it at the national and local levels.
The "Youth Forums" project is in its third year of implementation and will continue until the end of 2023. It aims to improve the knowledge and skills of young people to enable them to actively participate in their communities and several local, national and international levels, and to influence decision-making. This is in addition to creating safe spaces through which young people can express themselves and their ideas, which contributes to promoting youth leadership thus achieving justice in Palestine.
Share :