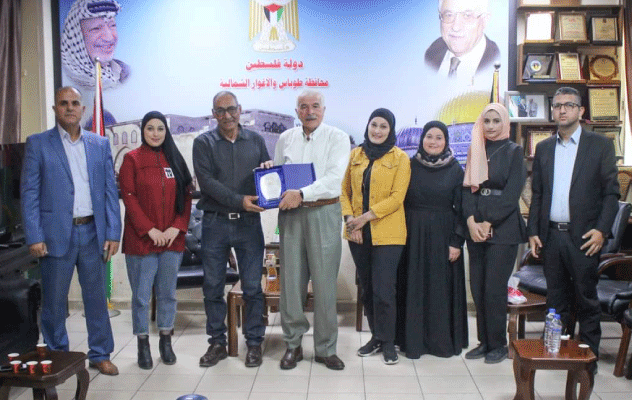 The YWCA of Palestine signed temporary unemployment and financial support contracts with a group of women from Tubas Governorate and Northern Valleys within the "Empowering Female Victims of Gender-Based Violence" project.
The contracts were signed in meeting held at the Governor’s Office of Tubas and Northern Valleys, which was attended by the Governor Younis al-Assi, the Economic Empowerment Program Manager at the YWCA of Palestine Wael Obeidi, and Project Coordinator Aya al-Atrash, and a number of Office staff.
The Governor emphasized the importance of programs aimed at women’s economic empowerment, especially in marginalized areas, which are constantly targeted by the occupation. He highlighted the challenges the Governorate of Tubas and Northern Valleys face and the dire economic situation in light of the restrictions imposed by Israel.  He also praised the work of the YWCA of Palestine through its different programs and its special place nationwide.
Obeidi, in turn, presented the different programs and projects of the YWCA in the different governorates of Palestine, and thanked the Governor and his office staff for their support of the project.
Both parties agreed on the continuation of their cooperation and joint work to serve the people of the Governorate of Tubas and the Northern Valleys.
The YWCA of Palestine is implementing the "Empowering Female Victims of Gender-Based Violence" project to contribute to gender-based violence response plans in Palestine in partnership with a number of local  bodies, NGOs, and private sector institutions, and through funding from UN Women.  The project aims to empower women and young women in marginalized areas economically, and promote their participation at all levels.
Share :