The YWCA of Palestine Launches “Alternatives to Violence Approach” Guidebook 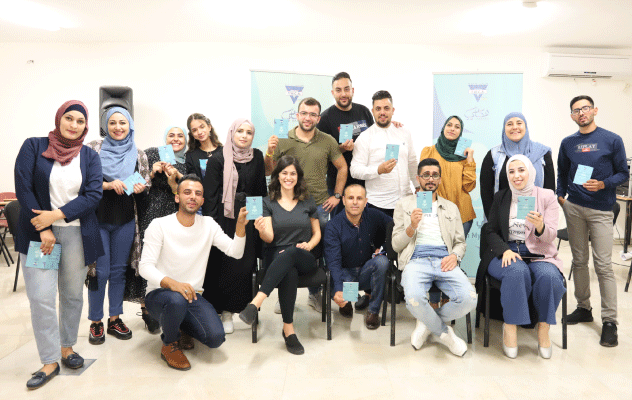 The YWCA of Palestine launched a guidebook for youth within “Makani” project on Monday 18 October 2021 under the title “Alternatives to Violence Approach” in conjunction with the World Week Without Violence campaign.
The guidebook is the product of a series of workshops around alternatives to violence approach, which were held in two phases, basic and advanced, and were attended by several young people from different areas of the West Bank and Gaza. The workshops aimed to provide a safe space for youth to learn about nonviolent alternatives to address conflict.
The General Secretary of the YWCA of Palestine Amal Tarazi said that the alternative to violence approach is based on diverse human rights and cultural principles. It aims to mitigate violence in the society by allowing individuals to develop the skill of crisis management through which they can build successful personal relationships, gain insight into oneself, and be positive and active members of their societies.
She added that the guidebook is in line with the belief of the association that living in dignity, having respect for oneself, and attaining self-realization are natural and fundamental human rights that ensure a world of justice and peace. She pointed out that the launch of the guidebook is in conjunction with the World Week Without Violence campaign organized by the World YWCA globally with the aim of eliminating violence against women and girls.
“Makani” project coordinator Selina Salameh said that the project comes under Leadership and Civic Engagement thematic area and is implemented in cooperation with Kerk in Actie in the Netherlands. She clarified that it targets young women and men aged 18 – 30 from different areas of the West Bank and Gaza, and aims to provide a supportive environment for Palestinian youth so they can take an active role in the society by creating safe spaces for them to learn about topics important to them, such as entrepreneurship.
She added that the project focuses on giving young people learning and self-development opportunities enabling them to contribute to community development, both locally and nationally. It also seeks to create the necessary space for them to share their experiences, ideas, and knowledge around issues concerning them.
Salameh stressed that the guidebook is a helping tool for young people to find alternative approaches to crisis management to follow in their daily lives by allowing them to learn about the concept of Transforming Power, the Mandala Model of Transforming Power, and the I-message technique.
Share :