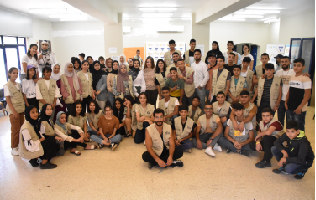 The YWCA of Palestine concluded the central summer camp for the student parliament within the "Y Youth Clubs" project held for three days in Ramallah in cooperation with twelve local partners, including youth groups and centers, grassroot organizations, and municipalities. Fifty five students took part in the camp from different areas in the West Bank. The camp included a variety of educational and recreational activities around different topics, such as national identity, community-based initiatives, and the role of the student parliament, which aimed to offer the opportunity to the participants for skills development, and self-discovery. The General Secretary of the association Amal Tarazi praised the efforts made to achieve the objectives of the project and stressed the continued support of the association of activities aimed at promoting national identity, and develop the skills of young people. She also emphasized the role of youth in the society pointing to the importance of promoting this role through civic engagement. The summer camp was organized in the third year of the project with the aim of providing the space for students from the different localities to connect and share experiences and ideas.
Share :