The YWCA of Palestine Joins a Webinar on Palestine 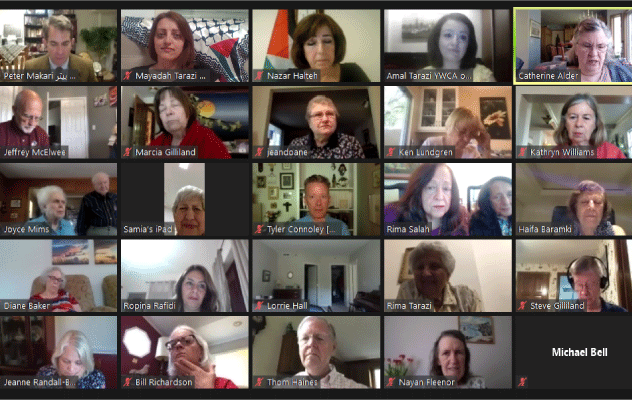 On Friday 14th May 2021, the YWCA of Palestine joined a webinar organized by the UCC Central Pacific Conference, and Global Ministries (the Christian Church (Disciples of Christ) and the United Church of Christ) under the title “Faith and Friendship Working Miracles: How the Partnership between the YWCA of Palestine and the UCC Central Pacific Conference Brings Healing and Hope to Palestinian Refugee Camps”. The webinar was around the current situation in Palestine and the difficult conditions Palestinian families are facing in addition to the commemoration of 73 years since the 1948 Nakba (the catastrophe) with a focus on refugee camps and finding ways to support refugees and responding to their needs by providing medical supplies and equipment, hygiene kits and food parcels. Around 45 people attended the webinar from Palestine and the US.
A film produced by the YWCA of Palestine was screened showing life of in the Jalazone refugee camp, which can be watched here.
Dr. Peter Makari, Global Ministries Area Executive for the Middle East and Europe, spoke about the long-time partnership with the YWCA and the history of the camps and how our partnership is changing lives for generations of Palestinians.
Amal Tarazi, the National Director of the YWCA of Palestine, highlighted the situation in Palestine, especially the recent attacks by the occupation and the ongoing Nakba in Gaza and Jerusalem.
Ropina Rafidi, the Executive Director of YWCA Ramallah, shed light on life in the Jalazone refugee camp while focusing on the work of the YWCA there.
Nazar Halteh, the Executive Director of YWCA Jericho, spoke about the work of the YWCA in Aqbet Jaber refugee camp, Jericho.
The webinar was concluded with emphasis on the importance of spreading the truth about what is happening in Palestine and contributing to the YWCA of Palestine so we are able to continue to serve the Palestinian people, especially in refugee camps.
If you would like to support our mission, donate here.
Read our statement on the current situation in Palestine.
Read the United Church of Christ’s statement on forced evictions in Sheikh Jarrah.
Share :