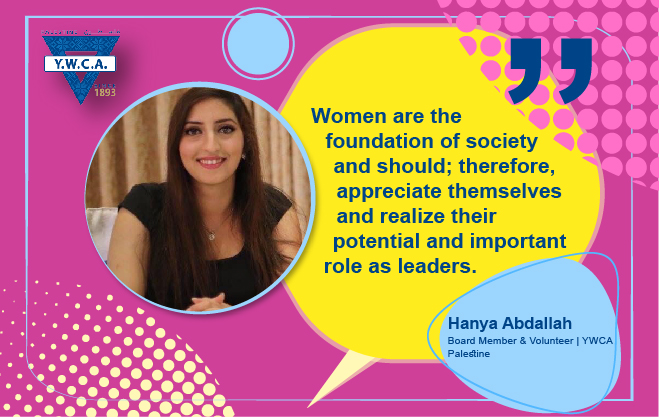 Hanya Abdallah is a young Palestinian woman from Ramallah and a mother of two. After high school, she wished to pursue her education abroad, but the social and cultural barriers stood in the way of her ambition. She, thus, decided to join the vocational center of the YWCA of Palestine in Ramallah, which motivated her to stay in Palestine to afterwards enroll at Al Quds Open University where she studied Business Administration.
Hanya co-founded the YWCA youth group, which has led a number of community-based initiatives since its establishment in 2011. She made sure to not only attract young women to the group, but young men as well, as she believes in the importance of working with both genders to achieve social change. Hanya was chosen to take part in the “Young Peace Performers” program through which she had the opportunity to volunteer in Kenya and Tanzania for one year. This was a tough experience for her as she witnessed a bitter reality full of challenges—one that made her stronger and more self-reliant.
In 2016, Hanya was elected to the Board of Directors of YWCA Palestine, which believes in the importance of intergenerational leadership. Through this position, she has been able to gain new knowledge and learn from the experiences of older members and at the same time raise the voices of youth and transfer their experiences to the board.
In addition to volunteerism, Hanya strives to contribute to social change through her children by fostering progressive thinking and instilling in them good values and a passion for giving back.
Hanya believes that women are the foundation of society thus the agents of change. Therefore, she urges all women and young women to appreciate themselves and realize their potential and their leadership role and to not let gender stereotypes and social barriers hold them back.
Share :