The YWCA of Palestine Concludes the 16 Days of Activism 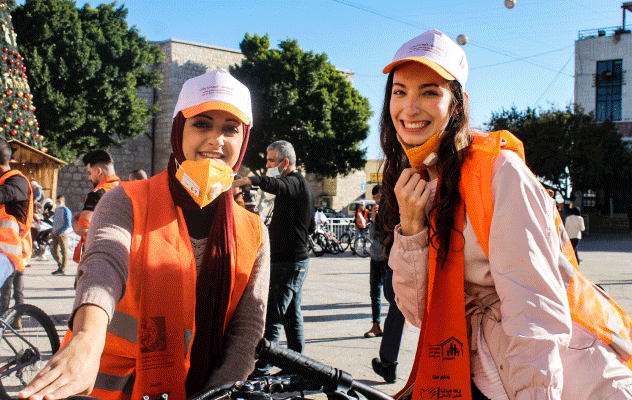 The YWCA of Palestine concluded the 16 Days of Activism campaign under the theme “Protection is a Right…Accountability is an Obligation” on Thursday 10 December 2020 by organizing a bike ride in the cities of Jericho, Bethlehem, and Tulkarm under the slogan “16 Days Campaign – Bike with Us to End Violence against Women and Girls”. This was in partnership with the Palestinian NGOs Forum to Combat Violence against Women (Al Muntada) and in cooperation with Alqamar Charitable Society - Jericho, Aida Youth Center - Bethlehem, and Al Awda Center - Tulkarm. The bike ride was followed by interactive activities and a balloon release at the endpoint in each city. The event was funded by the Italian Agency for Development Cooperation.

The closing event came as part of a number of activities organized by the YWCA of Palestine throughout the 16 Days of Activism in partnership with Al Muntada and in cooperation with local and international partners. These activities aimed to raise community awareness of the importance of the Family Protection Bill in creating a Palestinian society that is safe for everyone.

On 23 November 2020, two days before the official launch of the campaign, a public demonstration was organized in front of the Council of Ministries in Ramallah coinciding with its weekly meeting to demand the adoption of the Family Protection Bill. It was followed by another demonstration in front of the Legislative Council in solidarity with people with disability to claim their right to health care.

On 25 November 2020, the campaign was officially launched through a bike ride organized by a youth group in Ramallah under the slogan “Family Protection is a Path Not a Decision”, which was followed by a balloon release at the endpoint in front of the Ramallah Municipality. This activity was organized as part of a number of community-based youth-led initiatives aimed at raising awareness of the importance of the Family Protection Bill in eliminating gender-based violence.

The YWCA of Palestine also took part in a solidarity demonstration in Hebron to demand the adoption of the bill, which included displaying photos of women, young women and girls who lost their lives to domestic violence during the year 2020 and a street theatrical performance around gender-based violence at Ibn Rushd roundabout, which was seen by over 200 people.

We as well organized a series of virtual panels that shed light on the efforts made towards supporting the adoption of the Family Protection Bill, especially the youth-led initiatives.

Watch this video documenting the closing event in Bethlehem.